SAP licensing is widely regarded as one of the most complex models of all major software vendors. The yearly costs of SAP licenses continue to increase faster than any other vendor. SAP always charges based on usage, but it has become more complicated to define its usage. The urgency of managing SAP licenses is becoming more and more crucial, and for a business to take control of their SAP license usage, the first critical step is to fully understand SAP licensing and how usage-based pricing works.

Named user is the key metric for licenses of SAP applications. The basic license types are professional, limited professional and employee.

The professional license, by definition, is a named user that can perform certain operational tasks, system administration or system management that are within agreed license metrics. This license is the most expensive and is recommended for those who do a lot of production work or are heavy users of the system.

The employee license is a named user that can perform tasks purely for the individual’s own use and not on behalf of anyone else.

Once the SAP packages have been selected for use by the company, careful management of Named User licenses will have a substantial effect on actual SAP costs.
Therefore, it is crucial that each Named User is properly identified and classified.

Classifying users is one of the challenges in SAP licensing. There are different ways to classify users. Using the right classification can greatly reduce cost, while using the wrong classification may pose problems to SAP agreement, and consequently increase cost.

The license types are vague and not well-defined, so organizations have leeway in negotiating the licenses. It is best to classify users since unclassified users will be assigned the most expensive license by default. License types are also best to pick one type of classification and stick with it. It would be suspicious if classifications for users change often.

SAP users may be classified according to their usage. However, there are a few factors that should be considered when SAP users are classified by usage.

One way to categorize users is by the amount of activity the user performs. SAP has what is called “Dialog Steps”, which are simply the number of keystrokes and screens that are used. So, if a user has 1,000 or more dialog steps per month, then that the user probably needs a professional license since he or she heavily uses the system. On the other hand, those with little activity will be given employee licenses.

Classifying users by the amount of activity is easy to understand and also easy to explain to SAP. But the downside is that it does not take into account what the user does.

For instance, if a user uses the corporate telephone book in the SAP system 1,000 times, this classification will suggest that the user requires a professional license even though the user only checked on numbers in the telephone book. The user is not doing any production work and is only reading the data, which should only require an employee license.

Another way to identify users is by the different activities they access. Users are classified by the applications they use. If the user only uses one application, then the user will be given an employee license, while someone who uses ten or more SAP applications probably need a professional license for their usage.

Unfortunately, this type of classification also does not take into account what the user does. The user may be using several different applications but only reading data, while someone who only uses one application may be doing production work, such as creating and modifying data.

Type of Activity or Activity Group

Classification by activity group takes a lot of time. Thorough investigation of each user’s actual activities is necessary in order to optimize license usage. 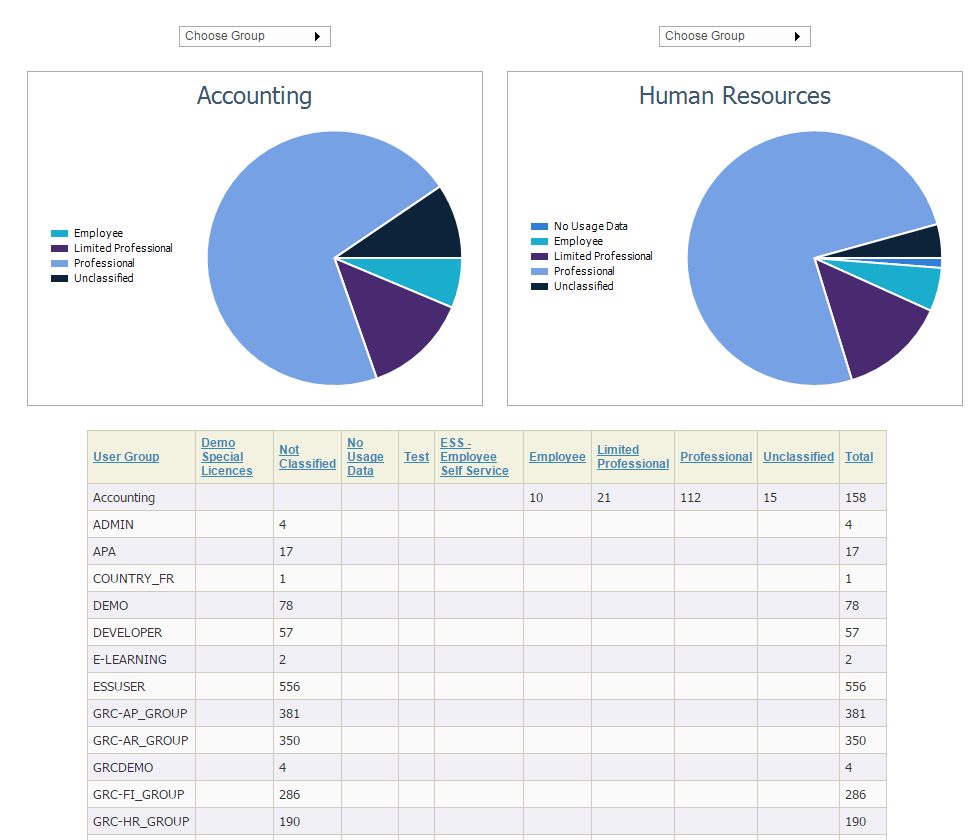 In large organizations with more than one office site or with subsidiary units in different areas, it is better for each subsidiary unit to optimize and manage its own data.

The main headquarters for the organization sets licensing measurements, distributes them, and optimizes the licenses globally. It can oversee the optimization of each subsidiary unit, while the subsidiary units optimize the data locally without affecting other subsidiary units and without changing the global parameters set by the headquarters.

This kind of optimization is recommended for larger organizations. It is a good practice to put a system that can isolate data for the subsidiary unit to allow local optimization, so that each subsidiary has control of its own costs.

This can happen if all managers were given professional SAP licenses to do their work, but not all need access to some of these applications. They would be paying for a professional license that are not actually being used.

This problem can also occur if the named user is no longer with the organization and the usernames associated with the named user were not closed. SAP has a way of detecting if a user has not logged in for quite some time and would give a notification to the organization. It is better to check this often to prepare for an audit.

Another thing to be wary is accessing the SAP system through a 3rd party application. SAP identifies third-party applications that use SAP indirectly, and come as Remote Function Calls (RFC).

It would be best to identify remote calls to SAP. Unidentified access can be interpreted as different users. For example, a third-party application accesses the SAP system ten times to view data. SAP could interpret it as ten users accessing SAP and ask payment for ten additional users.